6 Juggernaut Star Scours the Universe,[1] an igneous angel,[2] is the leader of (or speaker for[2]) the Holy Thorn Knights, a master of the Patram Sword Hand style of martial arts, rides a bio-organic motorcycle, and will stop at nothing to bring Allison to an uncertain end.[1] He is also a fan of tea ceremonies.[1]

He is first seen chopping off the head of Zoss with his hand while riding a shade-like creature.[3] He later arrives to meet 82 White Chain Born in Emptiness Returns to Subdue Evil atop a flaming motorcycle made of the shades of sinners and parts that may be angelic in nature.[2] Woe be he that mistakes the rider for the steed.[2] He has a particular hatred for Zoss. This hate caused him to kill Zoss too early, prompting more confusion than necessary.[4] He is in league with the conspiracy led by Metatron 1 to install Zaid as The Successor.[5]

Juggernaut Star is impatient. He is one of the only beings in creation (Metatron being the other) that is able to hold the knowledge of the true nature of Zoss' power and dominion.[6]

Juggernaut Star's true vessel is actually the wheel of the flaming motorcycle, and appears to have a female body in their ethereal form [8]

Juggernaut Star is somewhat of an expert in tea.[9] 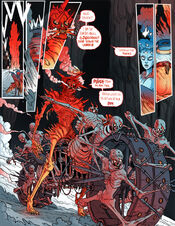 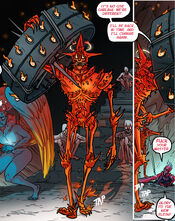 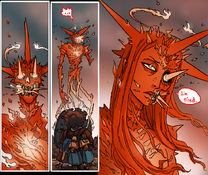 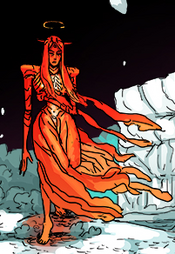 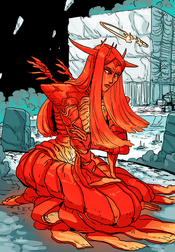 Retrieved from "https://killsixbilliondemons.fandom.com/wiki/6_Juggernaut_Star_Scours_the_Universe?oldid=11211"
Community content is available under CC-BY-SA unless otherwise noted.