"O! Corpse-gods of chance! Affix your hooks in our supplicant flesh! Lead us from the dreaded shoal of margin to the hallowed shores of holy Profit, and may our ledgers be ocean!"
- Common guild prayer[1]

The Guilds are great world-spanning criminal syndicates that rule Throne in the stead of The Seven, who do not care for creation.[2] In short, heaven is run by the super mafia.[3] The Seven have been in power long enough that many generations of the worlds they have conquered remember it has always been that way.[4] It is implied that the guilds have been in power for nine thousand years.[5] They were founded by the demiurges for the mundane tasks that they are named for.[6]

They employ the shells of the Prime Angels animated by bound devils as guild attack angels.[1] Or rather, animated by unbound demons who are lashed/bound to it's mechanisms.[7]

A Hell is common language term used to denote a corpse of a God that's been used for nefarious purposes. There are a lot of these.[8]

They are all interested in the Key embedded in Allison's head. The Pursuers each think that they have a chance at obtaining the key, for themselves or for a bid by the guilds. 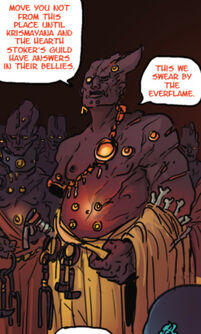 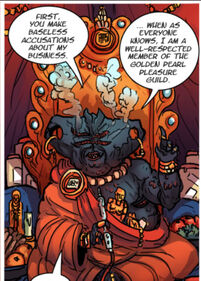 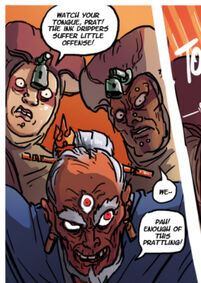 Master of the Gilded Cage.
Add a photo to this gallery
References[edit | edit source]

Retrieved from "https://killsixbilliondemons.fandom.com/wiki/Guilds?oldid=11350"
Community content is available under CC-BY-SA unless otherwise noted.