This article is about the place. To read about the god, see Yam. 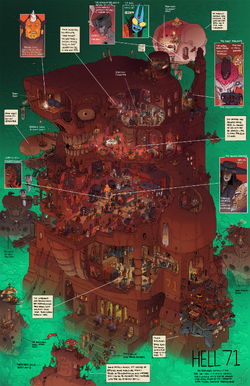 Hell 71 is the petrified corpse of the god Un-Yam and the headquarters of the Gilded Cage.

A number of notable characters were encountered in this very influential Guild Hall near the start of the Kill Six Billion Demons saga.

Retrieved from "https://killsixbilliondemons.fandom.com/wiki/Hell_71?oldid=10193"
Community content is available under CC-BY-SA unless otherwise noted.