Kill Six Billion Demons Wiki
Register
Don't have an account?
Sign In
Advertisement
in: A to Z, Groups, Organizations,
and 2 more

The Holy Thorn Knights are violent extremist Angels, first seen beheading the Conquering King Zoss.[1] They captured Zaid, and were subsequently discovered by Jagganoth, who brought one before the rest of The Seven.[2] They walk the Path of Thorns and seek to close the King's Doors.[3]

“The angels, though sturdy and true to their original purposes and long alloyed to the corrupting influence of infinity through reincarnation, experienced a profound sundering with the Universal War. The Shattering, as it came to be known, broke the long compact the angels had with the races of the omniverse to uphold the Law, and the Law itself was splintered and broken. The oldest and most holy among the warrior monks of the Concordant knights were shattered during the war, not to reincarnate for millenia more, leaving many young angels, still in their vapor or liquid states. Seeing the broken, burning remnants of the Universe, and the subsequent rule of the Seven destroyed what confidence many of them had in protecting reality, and still more came to the conclusion that reality itself was better purged, better purified through bloodshed than left to rot.

Now, the Concordance is a shattered, corrupted remnant of its former self, and rogue angels wander the worlds and the king’s road, selling their extreme skill in the ways of annihilation.

And through the void and the kings road atop steeds of glass and fire ride those terrible steel figures with their spined carapaces – the Holy Thorn Knights.”

– Preem Payapop Pritrum, introduction of 5th Treatise on Aeons – what to expect of the Pact[4]

They believe that Throne is corrupted and the only way to restore it is through purging what has ruined it: Servants, Humans, and Devils. To restore peace and order to Throne they believe they must return it to the state it was in before Zoss became the conquering king. The days when Throne was empty and silent.

“From the cracked shell of the angelic concordance sprang a hot and putrid rose, and a thousand thousand wild burning seeds poured into the smoke of the corpse of the universe, and there spread with a terrible incandescence. But along with these wild embers came a greater power – the sleek and awful perfection of the Thorns.” – Preem Payapop Pritrum, 5th Treatise on Aeons – what to expect of the Pact[5]

When the Law was shattered and the Concordance fell apart, the Thorns were one of the subsequent factions. They believe that the Old Law can only be restored by getting rid of the filth that polluted it.

It is later revealed that the Thorn Knights are led by Metatron I, the last remaining Prime Angel. They are likely the creator of the Path of Thorns.

The angel called ‘6 Juggernaut Star Scours the Universe’ is the leader of (or speaker for[6]) the Holy Thorn Knights, a master of the Patram Sword Hand style of martial arts, rides a bio-organic motorcycle, and will stop at nothing to bring our heroine to a grisly end.[7] 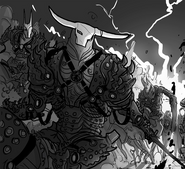