Preem Praman Nand, Lord Androsphinx of the Gilded Cage, is a demigod and mammal aficionado. He rules Hell 71.[1] He is a "corrupted gatekeeper."[2] Similar creatures have been seen guarding a King's Door next to Hell 71.[3]

As to the question of whether he is a servant or devil, it is said that he is possessed.[4] It is unknown whether or not said possession was consensual. 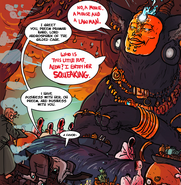 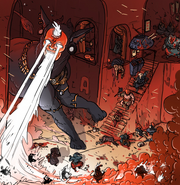 Praman Nand controls two very female-looking devils[5] known as Sweetie Pie and Honey Bunch. They are seemingly formed from viscera that attaches itself to a seemingly hollow figure of skin when masks are applied where the faces should be. This is because they are Hollows, which are devils living off and inside of the hollowed out body of a human.[6] In his own words, they are stupid and prone to violence.[7] They think of Praman Nand as their "dad" and each other as "sisters," yet they replace all pronouns related to themselves with "it" even when not exactly grammatically correct.[8] They are capable of combat, but are no match for 82.[9] Within the Void, they are tall and shaggy creatures.[10]

Retrieved from "https://killsixbilliondemons.fandom.com/wiki/Praman_Nand?oldid=11072"
Community content is available under CC-BY-SA unless otherwise noted.