Kill Six Billion Demons Wiki
Register
Don't have an account?
Sign In
Advertisement
in: A to Z, People

The Prime Angels were the greatest of the Angels. They had grown "monstrous and swollen" after the gods that they attended had died. When Zoss arrived in Throne, he smote them all.[1] Before that, they had guarded Throne for thirty kalpa.[2] The corpses of prime angels are highly prized in transportation and warfare. They can be re-animated and controlled with the use of bound devils.[3]

The Primes were those left in Throne to guard it from intrusion after the Gods committed self annihilation. Being immortal, all angels are the same age, but unlike the angels in the void, the Primes' vigil of Throne meant they never reincarnated - at least until Zoss showed up. This means their first incarnation lasted an exceptionally long time, and they are almost a direct line between the Gods and their creation. They are looked upon with reverence, as saints or holy martyrs by the rest of the angelic order.[4] None of the Prime Angels died and reincarnated at any point before they were left to guard Throne and remained alive until when Zoss killed them. It was the first death for all of them.[5] All of the non-prime Angels just hung out in the Void doing their own thing from the time Koss created them until Humans started crafting them armor. Some of them simply sat and contemplated infinity. Others were locked in a fierce and eternal war with unbound demons, which continually pour into the ashy part of the Void from its edge, which fades away into nothingness.[6] It is presumed that some of the ones in the Void died and reincarnated over time.

The angels were all named on creation by the Gods themselves, and will have no other name for the rest of eternity, for they are fixed and immutable.[7] Prime angels have shorter names than the angels that were relegated to watch the void. There’s no known reason why this is the case, but short names are often venerated among angels because of this.[8] It is possible that some of the slumbering primes have single-word biblical names.[9]

Known primes include 2 Michael and Metatron 1. The rest are dormant and awaiting reincarnation in the part of the void corresponding to the area around Koss' Workshop.[10] Older angels take a longer time to reincarnate.[11] Angelic Hierarchy is generally decided by the length of previous incarnation (no matter how many proceed it) as it is usually taken to indicate wisdom or prowess.[12] Therefore, any Prime Angel that awoke would be considered of high rank. 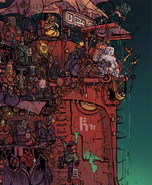