Kill Six Billion Demons Wiki
Register
Don't have an account?
Sign In
Advertisement
in: A to Z, Characters, Deities

Un-Sivran is the god of endless conquest. He seeks the conquest of all matter and can teach the ways of violence. His quest is eternal and so he is doomed.[3] He is presented as an example of a white deity.[4]

He and Ogam-am told Prim to bury Un-Hansa on their battlefield.[1] He fought The Red Eyed King for eight days before retiring from exhaustion.[5]

His corpse is the headquarters of the Geas Knights, where the Bone Listeners tap quests out of the Skull of Un-Sivran.[6] 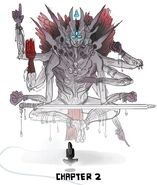